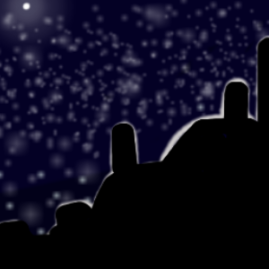 A choice base game, the blurb promises that it is ‘Longer than 2 hours.’ Hmmm….this is something, in a competition for sub 2 hour games, that is probably not advisable to advertise up front. However, I’m going to give it a couple of hours and see where I get to!

The protagonist, Sandra, a research assistant on a mining station on a small planetoid wakes up blinded from Vulcanium poisoning. The station has been attacked by Outworlders and mostly destroyed. Sandra is the sole survivor. Fortunately, Odys, the station’s AI is still mostly functional and even though you are blind, it can guide your actions. Escaping from the station becomes the immediate goal of the game.

Given that Sandra is blind, the core mechanic of the game is that Odys acts as your eyes – while your other senses, smell and touch, are still available – the game provides description of rooms and objects and events through the aegis of Odys. I’m sure this has been done before in other games, but it is implemented and written exceptionally well, here.

The game has a large map – very large, set over several levels. Primarily the puzzles involve searching for and using objects – I am impressed by the implementation. The player has an inventory in which objects can be selected. On returning to the room description, choices vary depending on which object the player has selected. This works extremely well through the course of the game. One of the things that could have ruined this was the brute force solution approach. Select every object in every location and see what happens. However, the text (delivered via Odys) did a good job of cueing the player, so that it was apparent what object you needed at most points.

At a couple of points, you lose Odys, and are reduced to navigating blindly in the dark. one of which is a maze, but nicely done – listening gives clues about the right way to go. Also, there’s a very cool little navigation puzzle that makes sense in the context of the character’s condition (and must have been a nightmare to implement).

There are more clever little touches. The fact that links are color coded – conversation is pink, actions white. Multiple save slots. Examinable objects at any time. Multi-object puzzles. One of the things that struck me as I was playing is that it would have been nice and more streamlined had I been able to go to the Inventory at any point rather than just in the room description. It’s slightly awkward to choose an object when you’re at the point of using it – you need to go back to the room description then back to the place where you can use it.

The game is loosely split into several chapters – one of the nice things that the author has done is to limit exposition at the start of each chapter – we are given a basic tasks to accomplish, but then the player has the option of fleshing it out by asking Odys a number of questions if they wish. It’s much more subtle than the ‘big text dump’ linked together with ‘continue’ links. It is a very large game, this – Section II in particular is massive.

If I had a criticism, and, really, I’m reaching here. It’s that Sandra isn’t really fleshed out at all. We don’t get to see much of who she is.

I did find a couple of technical issues which may or may not be bugs – attempting to take the papers in the Technicians office – it seemed like I took them, even over Odys’ objections, but they didn’t appear in my inventory – I was worried that I needed them and this had somehow made the game unwinnable (it didn’t).

The levers puzzle in the lower technical corridor. On switching the levers, I get the message “The lever immediately switches back.”, but then the lever is in the other position. It makes the puzzle – difficult to solve without just randomly fiddling with levers as you’re not sure whether what you’re seeing is a bug or expected behavior.

I get to 2 hours and I don’t think I’m even nearly finished. There’s the beginnings of a ‘what really happened’ plot going on now (I think) – but I’m not going to say anything about that. I am compelled to finish, though.

This is an excellent game – well implemented with only a couple of minor technical issues, well written, engaging, with a compelling plot and workable ‘adventuring’ mechanics. I wish I had been able to finish it in the time limit. I’m definitely going to keep playing. 9/10.

One thought on “Lux”