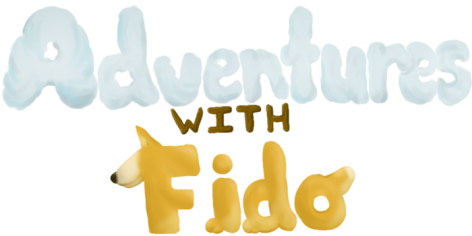 Spoilers ahoy. I recommend you play this game before you read this review.

A lengthy choice game, this is a much bigger game than it first seems, with a set of sub-worlds to explore, each of which has quests, achievements and tasks. Exploring the whole thing definitely fills up the 2 hours and potentially more. I’ve spent a couple of hours on it now, and I have not quite finished.

As a small corgi, you explore the garden, try and find bones and generally enjoy life.

I guess I was quite surprised that Fido has the most ‘gamey’ feel of the choice games I’ve played so far – even the adventuring of Addicott Manor and Lux were still a relatively linear progression of a narrative – Adventures with Fido is more open world – I can explore and discover new areas at my leisure.

At first I was inclined to think this was a game I wouldn’t enjoy – the text is presented from the point of view of a small dog and seems to be written to appeal to children – it is light and whimsical and not my thing at all. However, I was wrong, and the further I played, the more I enjoyed it.

Some aspects of the gameplay I hadn’t seen before in choice games and were interesting and very well implemented – lock picking for example. It gets harder than it looks at first. It’s clever.

That’s not to say all aspects of the gaming experienced filled me with joy however – in the Mole Kingdom, I found the mechanics of some of the tasks – math problems, somewhat problematic. Look, don’t judge me, but my old brain struggles to quickly work out 9×8, so, when I’m presented with the following problem : You have 30 seconds – Solve 40x – 5y – 35 = 0 for y. Eek. Math is not my friend. It took me 30 seconds to google “remind me how to solve equations. Yes, I know I learnt it at school all those years ago, but I’ve slept since then.”

There are a couple of puzzles/sub-games that I felt weren’t cued enough – in the Dark Tunnel, you suddenly develop a fuel attribute, and have to do stuff seemingly at random. Huh? I think I solved it/did what I needed to do, but was never quite sure whether what I was doing was just guessing – and the actual goal is still obscure.

Several quests can’t be completed in a single day – they gradually unfold after several days. I didn’t realize this at first and spent a while clicking around looking for something to do before going back to have dinner and progress the game.

Although a minor point, maybe the color scheme of the game could do with just a little toning down. It’s quite a long game, and white on bright cyan is pretty exhausting for the eyes. It also makes some of the text in different colors quite difficult to read. Green, for example.

After a rocky start, I did enjoy this game. The style of the text isn’t my personal choice, but I appreciate what the author has done – it’s extremely well written. The puzzles, in the main, were fair and I very much enjoyed a couple of the worlds presented. I’m definitely going to keep playing and see whether there’s an endgame. 8/10