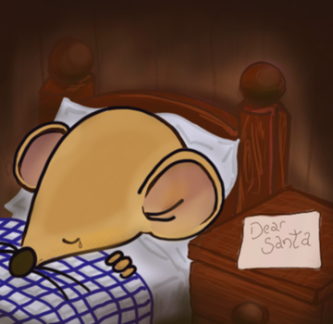 Spoilers ahoy. I recommend you play this game before you read this review.

A parser adventure written in Quest. I played this game for the full 2 hours. As a distinguished gentleman mouse named Gerald you are charged with completing a list of tasks to ensure your daughter, Jessica, has a happy Christmas.

This is an old school puzzler and I think some people will find it very very hard indeed.

Like me. It’s too hard for me. I can’t get anywhere. I have wandered around the garden, found a bunch of objects, and am now trying to sharpen a pair of scissors so I can get through some nettles. I have a gritty stone, a wet sponge, and a pair of blunt scissors. Sharpen Scissors. The stone is too dry. Wet stone. I don’t understand your command. (This is doubly frustrating because ‘wet sponge’ was perfectly fine.) Rub stone with sponge. Put water on stone. I can’t see that (water).

I am reduced to trying more and more esoteric commands to try and transfer water from the sponge onto the stone. Squeeze sponge. Dampen/wipe/wash/moisten stone. I don’t understand your command. But fail and begin to wonder whether I’m on the wrong track, and I must use another way of making the stone wet.

I have a pot, but the command ‘put water in pot’ or ‘fill pot with water’ is met with a blunt “I can’t see that (water)” even when I’m stood right next to a running tap. (To be fair, the pot does have a hole in the bottom. But I would have expected at least some cue that I need to somehow block up the hole…or not – “The pot fills with water but it quickly dribbles out of the hole in the bottom”).

I wander around some more, but then the 2 hours is up and I give in. I’m very aware that despite my gripes, the solutions may be obvious to some and it is just my own basic badness at puzzles that is holding me up.

There is obviously a lot of work and craft gone into this game. It is certainly a large implementation. But, there are some spotty aspects. I can often open things that should be unopenable. Room descriptions occasionally repeat. Some common actions are not implemented at all. One place is noisy, but I can’t ‘Listen’.

The prose is solid and this world is well realized – it is also occasionally funny in parts – the nightclub got a couple of chuckles. However, it’s also, and I’m not sure how to phrase this…I guess the closest I can come is – tonally confused. When I start playing, it feels like a game that would be good to play with a child – all anthropomophic cuteness and whimsy, but then I hit the nightclub and a foul mouthed pigeon and the game shifts to being more adult in tone.

Having said that, it does look like there is more to this game than just checking items off a list. There is a missing rabbit, a missing wife, odd behavior from the resident humans….I think there might be other goals to achieve and this plot might open out as the player progresses.

One thought on “The Mouse Who Woke Up for Christmas”